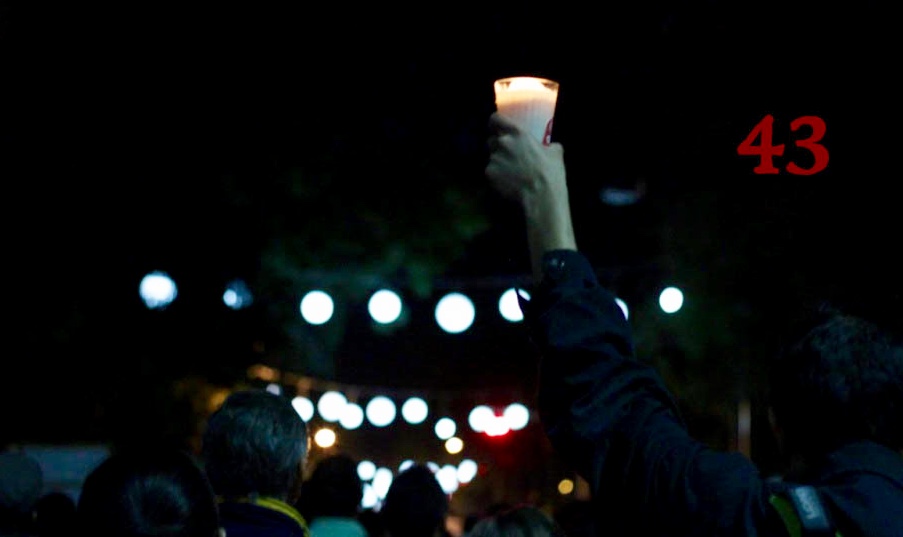 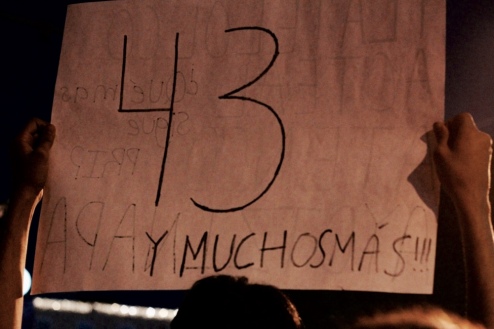 Today marks exactly one year since the disappearance of the 43 Normalista students in Ayotzinapa–Students in a rural town in Guerrero studying to be educators, aspiring to provide a better life for their families, their community. The atrocious act sparked outrage in Mexico and the world, drawing light to the murderous narco state.

I was living in Mexico at that time. I remember I was in Zacatecas sitting at the dinner table with my grandparents and nino when I heard the news. Ayotzinapa definitely played a part in my experience living in Mexico. A sort of revelation and a clearer understanding of the dire state of our beautiful Mexico. It was an inevitable infusion to my then present experience and all the memories of my family’s annual summer visits to the place of our roots. I wrote this two days after the students were claimed “burned to death.” It is a documentation of the feel during those days from my perception. It is something I did not really talk about with anyone. I thought about publishing this right after I wrote it, but something in me needed to keep it for myself, for a while at least. I needed to process. I am still processing—it is a process. It has been a year. Mexico, aún me dueles. Aquí quiero compartir.

Grief prevailed in the city of Guadalajara, in all of Mexico.

A bleak sky and rainy streets painted the reality. I allowed myself to feel; acknowledged the violence, assaults, atrocities, massacres, the inhumanity.

I sit en el camion, the bus, and stare at the cracked pavement. I write in my journal sitting at the rear end corner. The jerking bus makes this a difficult task, nevertheless these thoughts need to go on paper. Now.

People walk, stare down at the ground. Taco stands in every corner. The aroma of fresh potato chips infuse the air all around El Santuario. A lady on a wheelchair sells pink roses by Transito. My pen jolts to the rhythm of the bus; my writing, a mirror spectacle of the physical experience.

It was a day after the Ayotzinapa students were “confirmed” burned to death.

The weather felt the melancholia. Ashes of inhumanity flowed in the air. We breathe it, wanting to or not.

I notice the trash on the floor today. The descarapelado, pealing murals next to the arched bridge in front of La Normal. The masses awaiting for a bus.

I rested my head on my arm that hung to the bar above me. My vision and eyes, a petrified stare into a dimension outside the timely one my body lived in. My body, was packed traveling with many others inside this  large construct that transports many bodies from one location to another, bodies get out, bodies come in—the bus. ‘Clandestino’ by Manu Chao played through my headphones. I listened to nothing. I held on. The city buses race and your body almost floats as if on another gravitational force, and you consciously let go. You float and you almost expect and accept the possibility of a sudden crash; but the thing  you are being transported on abruptly stops before you know it. An experience of shaken emotions processed only in the mind. Your body shows no reaction. What emotions?

I see the grass littered with paper, old bottles in front of chicken fences with falling ads. Scraps. Remnants. I wonder when was the last time the sidewalks were swept, when was the last time that sidewalks were re-built. Cracks on the floor grow faster than processing a memory thinking one day sidewalks were smooth. Perhaps someone forgot that this is their life path, of many others, too, for almost every single day of their lives. The trash is as prevalent as the ashes we breathe. Perhaps we forgot that this was our path, our life, our home. Perhaps we forgot what it means to live.

The streets were covered by layers and layers of fog, a dense grey filter over the city. It made you forget there was a sun.

I’m almost home. How long have I been here. No one talks, no one listens. Do people just accept it—this way of living? Where is everyone? We breathe corruption, breathe the evaporated blood of the 43 students. My beautiful childhood memories of a Mexico full of vida, full of laughter, and full of freedom now infuse with the inhumanity, the atrocities—those which for years have destroyed families, have murdered people, have instilled fear, have stripped every being’s right to a joyous life. It is an imprisonment of the mind, the acceptance of “this is the way it is,” something I heard too many times.

Ashes. Oxygen. Which one is which?

I admit the world I live in. I do not accept it.